My homegrown hops are almost ready for harvest. In particular my Northern Brewer plant in its second year is yielding even more cones and is taking over two maple saplings in my neighbors yard. The cones will be ready to pick very soon.

As much as I’d like to brew another batch of Uncommon Harvest, I have a vial of the limited edition White Labs 006 Bedford British Ale that was just released from the White Labs Vault. While thinking of what beer I could use with that yeast and my homegrown Northern Brewer.

Almost forgotten now, Pete’s Wicked Ale was one of the first prominent craft beers in the 1980s and 1990s. The brand was sold and died a slow death before being discontinued in 2011. The beer was a brown ale, a style that could work with the ingredients I want to use. Yes, I wanted to do another beer inspired by a 1990s recipe.  In my mind I thought that Pete’s Wicked Ale was flavored with Northern Brewer hops.

Brew Your Own published a recipe ($) that called for Northern Brewer for bittering and Brewers Gold for the flavor addition. Most of the other clones and descriptions of the beer that I found highlighted that Brewers Gold was the flavor hop.

To confirm this I looked up the old Pete’s Wicked website via the web archive. 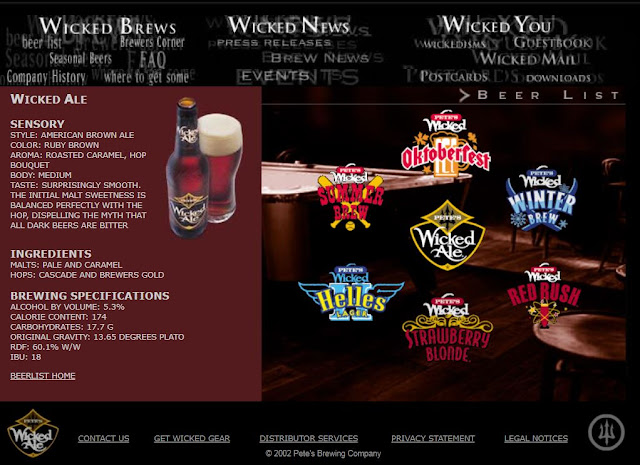 It’s not a suprise my memory was off. Incidentally I did buy a Brewer’s Gold plant earlier this year. The plant didn’t really take off until I moved and replanted it in a new spot. With any luck I’ll have some homegrown Brewers Gold next year that I can use in a true clone of Pete’s Wicked Ale. I could also use them for some other historical recipes.

Like many beers, the recipe for Pete’s Wicked Ale may have changed over time. I can’t imagine making a brown ale with only pale and caramel malt. If I were to freestyle a guess, maybe the new owners tried to make the beer lighter in color. Another clone I found in the AHA thread is allegedly the original recipe from Pete. Maybe I will give that recipe a try next year. I am intrigued by the stupid amount of crystal malt.

The plan is to still do a brown ale with my Northern Brewer. One not inspired by Pete’s Wicked Ale, even though I could make a reasonable approximation with Northern Brewer hops. Considering I never tasted the beer before it was discontinued, let alone in it’s hey day, a clone should probably be as close as I can make it.