When Elaine from Seinfeld’s contraceptive of choice, the sponge, was removed from the market she went out of her way to buy as many sponges as she could find. She then thoroughly vetted every potential sexual partner to determine if he was “sponge-worthy”, less one of her precious sponges be wasted on a beau who was not sponge-worthy 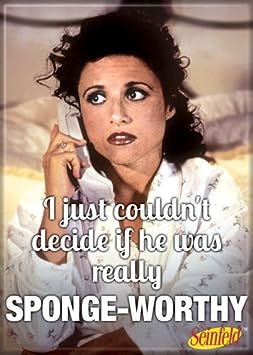 My uncle Dave loves Samuel Adams Cold Snap and stocked up on it while it was still on store shelves. He and a buddy of his made the sponge-worthy analogy when deciding when to enjoy one of their stash.  Although Cold Snap is Sam’s spring beer and it is released in January, Cold Snap is actually a really good beer to enjoy during the summer. Witbier is light, refreshing, and has a bit of citrus flavor. That’s what I tell people about Plum Island Belgian White when I pour for Newburyport. Dave finally enjoyed the last of his Cold Snaps at a sponge-worthy beach day a couple of weeks ago.

With the scourge of seasonal creep upon us, pumpkin and Oktoberfest beers are already appearing upon store shelves. I am not opposed to saving seasonal beer for sponge-worthy events that may occur when the season is over. Do you really want Pumpkinhead when it’s 80 degrees on Labor Day weekend? If your pool is open, or you head to the beach during September, do you want an Oktoberfest? How about a light summery beer during an Indian Summer in October? With summer temperatures thankfully persisting into August, now is the time to stock up on commercial summer beer. With Labor Day over two weeks away, hopefully you still have sponge-worthy summer events that will require summer beer.

The key to preserving beer is preventing oxidation and exposure to ultra-violet light. Any beer ideally needs to be stored in a cool, dark place. If you have a dedicated beer fridge that is the best way to store beer for long periods of time. Basements or closets also work well as there is little light and they tend to be cooler in temperature. Temperature is key because the colder the beer is stored, the more CO2 is absorbed by the liquid, and the less oxygen that is absorbed.

Generally speaking, beers that are higher in alcohol will keep better than lighter beers. If you brew or buy big stouts, porters, or barleywines for the winter you can keep those beers for months or even cellar them for years until the right “sponge worthy” moment. I have a bottle of Yankee Swap 2013 that I still haven’t had the right sponge worthy moment to open. Many breweries have “best by” or “born on” dates on the package. These are recommendations from the brewer. In my opinion you can almost completely disregard them in a dark, malty beer.

Hop flavor and aroma are the first characteristics to go in a beer, but beers with plenty of hops tend to generally keep better than lightly hopped styles.  An IPA is best enjoyed as fresh as possible. A balanced style with plenty of hops like an ESB or Australian Sparkling Ale will keep fairly well. Lightly hopped beers like many American wheats, kolsch, witbier, and hefeweizen tend to lose their flavor more quickly. Anecdotally, I would suggest not hoarding a Sam Summer or a similarly light style of beer for more than a season or two. In my experience the flavor is diminished by Christmas.

As soon as you notice your sponge-worthy beers start to taste stale it is time to let go. Drink them up as soon as possible, the flavor is not going to get any better. If the beer is skunky that means ultra-violet light has ruined your beer. Contrary to conventional wisdom temperature does not make beer skunk. If the beer tastes papery, or like wet cardboard that means the beer is oxidized. This year I have so much homebrew from the summer, I don’t need to rush out and buy sponge-worthy commercial beer.

If you are not sure if an event or occasion is sponge-worthy my advice is when in doubt to just drink the beer! If you homebrew, you can almost always brew another batch. If you are hoarding a commercial beer, and it is out of season or no longer available, it is not the end of the world. Maybe you will find a new favorite beer when forced to buy something else.